thesun.co.uk – McDONALD’S fans aren’t happy after the restaurant chain ended up accidentally provoking its customers with a cheeky tweet.

The official Maccies account posted a picture of a table in one of their restaurants, with the caption: “If your night doesn’t end in a deep chat around one of these, did you even go out?” 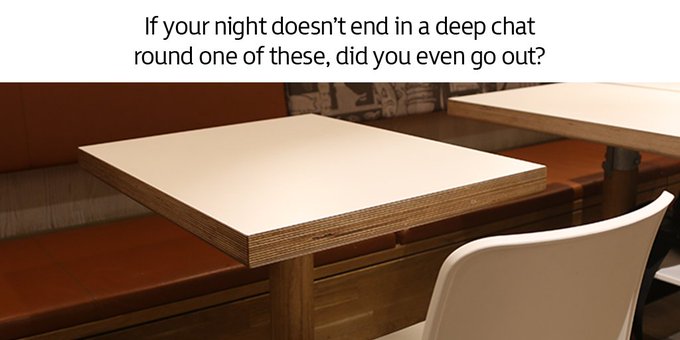 But the snap, shared on Friday, has ended up touching a nerve with thousands of regular customers.

The problem, as many fast food fanatics will know, is that many Maccies branches close off their seating areas late at night.

This means that having a drunken DMC around a McDonald’s table at three in the morning is impossible for thousands of customers, who have to settle for a standing deep chat instead.

Clearly, the late-night closure of seating areas has been a sore point for a while, so the offending tweet felt like the Mac daddy was rubbing salt in the wound, despite the tweet’s harmless intentions.

In a response to the original tweet, regular customer @Raniargh said: “No because you lock off all the seating areas?”

The smackdown has been liked by over 26,000 people already, compared to the 1,300 likes on Maccies’ original post.

And more disgruntled customers ended up piling in faster than you can say “Big Mac to go, please”.

One wrote: “You don’t let us stay in, you kick us out at Newcastle store,” prompting McDonald’s to apologise and send a link to a customer services form.

Man they doing customers dirty like that at Mcdonalds?? Just kicking you out while you’re in the middle of your filet-o fish??