News – “KFC debuts ‘Waffle Double Down’ in Canada only”

baltimoresun.com – What do you know; Canada got another awesome limited-time-only fast food meal. In January, the Great White North was given Arby’s curly fry poutine and now the country has KFC’s Waffle Double Down – a play on chicken and waffles, an American brunch classic. The brand’s new offering is made with a fat Belgian waffle sauced with maple aïoli and sandwiched between two crispy chicken fillets. The bun-less sandwich hit menus on March 26 and is available à la carte, as a combo meal, and as part of in a box meal.

“The Double Down is our most talked about and demanded menu item in Canada, so we wanted to do something special exclusively for Canadian fans,” KFC Canada chief marketing officer Samantha Redman said in a statement. “We know fans have been craving chicken and waffles on our menu, and we’re happy to provide this unique take on the trendy food pairing. The maple aïoli sauce is a sweet nod to KFC’s Canadian fans.” 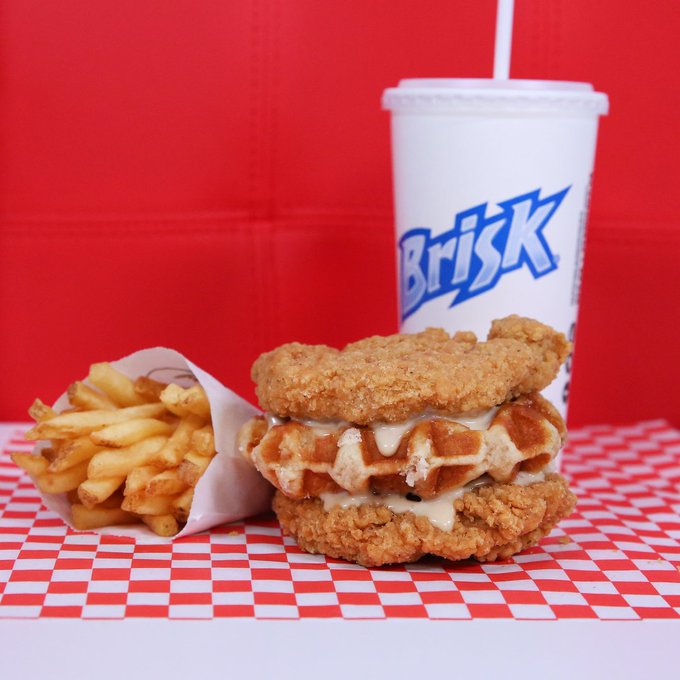 Double Down? Chicken and Waffles? It’s about time. Meet the new #WaffleDoubleDown.

The original Double Down – built with bacon, cheese, and sauce – debuted in 2010 and was crowned KFC’s best-selling new menu item ever. The chain sold over 350,000 in its first 10 days. For more on the finger lickin’ good fast food chain with a female Colonel Sanders, here are 15 things you didn’t know about KFC.

Okay so Leer was huge fan of the original double down and I just couldnt get with the chicken on top of chicken with some cheese concept….but I can fuck with this…the waffle is a huge difference maker yo…bring this shit to the stats asap.