bustle.com – When you’re really hungry and hankering for something heavy duty, a watercress salad tossed with a light vinaigrette and an iced green tea won’t cut it. You’re going to need something more substantial than that. There’s good news out there for all you folks with hunger pangs: Chili’s just announced the Boss Burger, a giant burger topped with literally almost every meat you can think of. Yes, it’s meat topped with meat.

According to their menu, the beef patty is buried under smoked brisket, rib meat, jalapeño-cheddar smoked sausage, bacon, cheddar, their house-made ranch, and BBQ sauce — plus lettuce and tomato, because, you know, you need to get your veggies in. In a statement to PEOPLE, Steve Provost, the CMO of Chili’s, said, “This burger is a meal in itself and for some it can be lunch the next day.” He suggested rounding up your friends and family to share the behemoth of a burger with you, or you can try to finish it yourself in what he referred to as the #ChilisBoss challenge.

PEOPLE notes currently, you can only find the Boss Burger on a test menu in certain cities, like Dallas; but a representative confirmed to them if it’s well-received, Chili’s will release it nationwide. 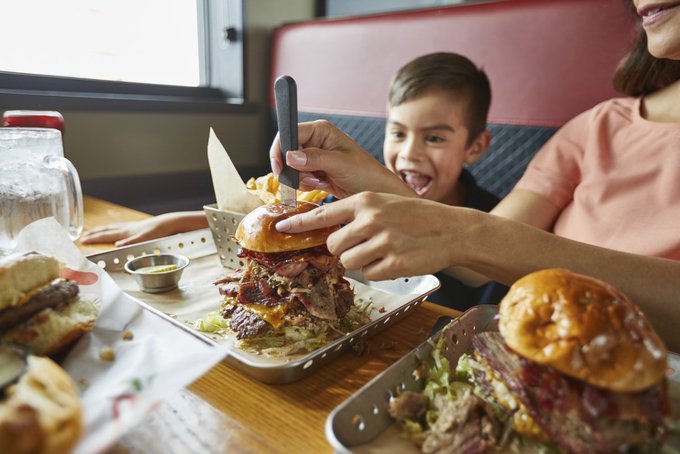 Chili’s just launched a behemoth of a burger, but is secretive about exactly which locations are carrying it. Can you find this Boss Burger? http://ow.ly/j3LZ30ju6b8

While this might be the most monstrous burger Chili’s has introduced, it’s certainly not the only one. Their line of Big Mouth Burgers also includes the Southern Smokehouse Burger — topped with bacon, cheddar, and onion rings (you guys, onion rings!) — and the Bacon Trifecta Burger — topped with bacon slices, bacon jam, and bacon aioli. Needless to say, Chili’s embodies the philosophy, “Go big or go home,” wholeheartedly.

“Chiiillliiissss baaabbbyyy bbaaaccckkk rrriiibbbbss buurrggerr” Doesn’t quite have the same nice ring as the rib jingle, but I don’t care. I am all in on this monstrosity of a burger. If you don’t already know, Chili’s actually does burgers really well, they use thick cut bacon, their cheese is usually is perfectly melted, on the smoke house burger (my usual if I find myself at a chilis, which probably hasn’t been in 3 years) comes with perfect cooked onion rings.

So I know for a fact, that adding ribs, brisket, jalapeno sausage and bacon to their already classic juicy patties, is gonna be a home run. So what if it is 1650 calories? You shouldn’t be eating at a Chilis anyway if your counting calories. (PSA: Only people trying to gain weight should count calories, 90% of the world doesn’t meet macro nutrient/calorie requirements anyway). But for me, I’m crushing a workout and then posting up and taking one of these suckers down. So kudos Chilis, for getting in the everything but the kitchen sink game. I’ll be seeing you soon!