News – “This NFL Player Used A Catfish As A Beer Bong, Seriously [WATCH]”

foodbeast.com – A bunch of football players recently got catfished while at a Nashville Predators playoff hockey game recently. No, this isn’t a Manti Te’o piece, these athletes snuck a whole catfish into the Bridgestone Arena and turned it into the wackiest beer bong of 2018. 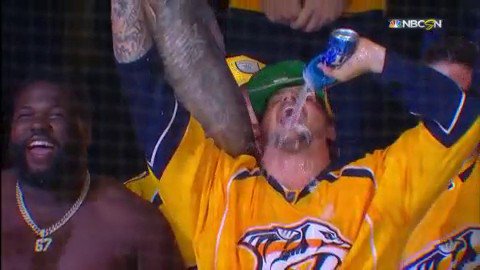 The Titans O-line is out here wildin’

Twitter Ads info and privacy
Tennessee Titans offensive lineman Taylor Lewan was caught on film getting a boozy waterfall through the fish’s mouth, while some of his teammates were eating up the action in front of the Nashville crowd. Only guy not 100 percent into it was Lewan’s quarterback, Marcus Mariota, who was clearly not ready for that level of partying.
While a catfish beer bong sounds bizarre enough on its own, sea creature alcohol vessels aren’t anything new. There were some clueless dumb frat bros who utilized live sea creatures as drinking vessels because they thought animal cruelty was badass. There’s even video of a guy going bottoms up on a salmon in 2016.

Now being a former offensive lineman, one of the best parts of that mind-set was just being an absolute meat stick, and getting away with it. It’s a culture of Neanderthal behavior, but at the end of the day it’s almost expected from an offensive lineman.