News – “Why Does This Photo of a Jar of Raspberry Jam Make Everyone So Uncomfortable?”

munchies.vice.com – In her book Bird By Bird, essayist Anne Lamott wrote at length about the economic and social signifiers that one could find hidden in school lunches, and about what was deemed acceptable for a kid to pull out of his or her lunchbox. In the same collection of paragraphs, she also wrote about why raspberry jam is the worst thing ever.

“I couldn’t remember just exactly what it was about raspberry jam that was so disconcerting,” she recalled. “So when I got home, I called a friend who is also a writer […] and my friend went on an impassioned, disoriented riff about how there was too much happening in raspberry jam, too many seeds per spoonful. It felt like there were all of these tiny little pod people in it. It was Body Snatcher jam.” 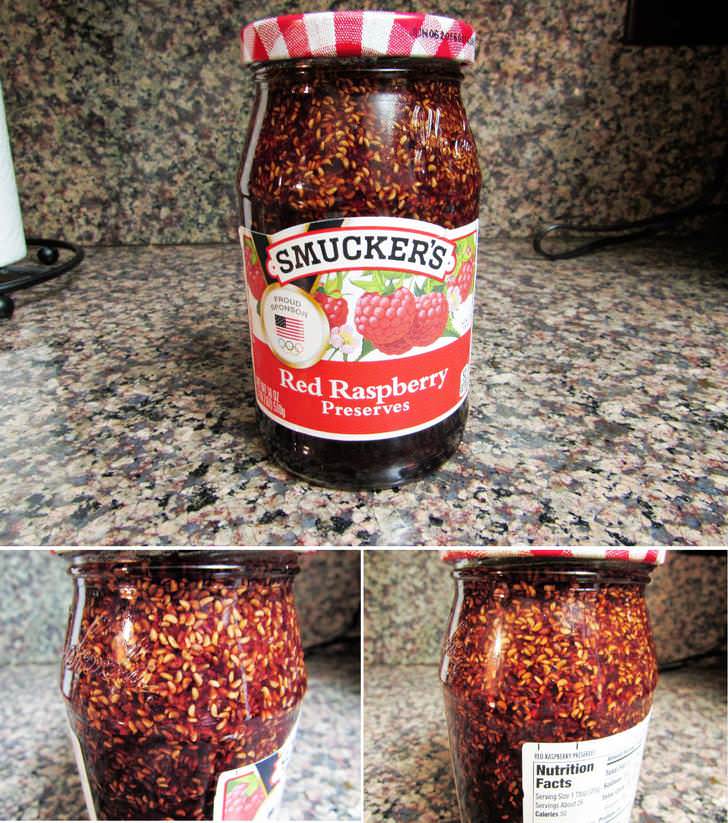 Let’s hope Lamott wasn’t scrolling through Reddit’s r/MildlyInteresting sub today, because she would’ve seen this god awful jar of Smucker’s Red Raspberry preserves, which is upsetting on a number of levels. First, why is it all seeds? Next, why would someone look at that jar on a grocery store shelf and think “Yes, this is the one I want, the one that looks like it was taken from the set of Rescue Dawn.” Finally, FFS, why would they then take it to the checkout line, pay for it, and bring it home?

I’m not even gonna front like I didn’t frown up as soon as I saw the picture, and that was before even clicking the article. That looks awful, like a bunch of maggots just chillin in a jar. Yuck.