For anyone that doesn’t know…. Minor League Baseball is home to young major league prospects and hopefuls, die-hard local fans and some of the best team names and mascots these eyes have ever seen. Since most people don’t pay attention to the minor leagues I decided to put together a post and catalog all (most, it’s what I could find people..I’m sure i’m missing some) of minor league baseball’s food related mascots. Low key I need some of these teams to send the JG team some of these fire hats.

Wooooo buddy that mascot would be in trouble around me there’s old bay and butter on deck. Look at those fitteds, can’t tell me those ain’t fire.

Jacksonville Jumbo Shrimp is such a dope name, but damn that mascot is something nightmares are made of.

Dude we’re only three teams in and I’m hungry as shit for some seafood. Now this is a good mascot and also a dope hat….your mascot shouldn’t sent kids crying in terror.

Another terrifying mascot, i’m not even sure what the hell its supposed to be. Maybe some sort of darth snuffleupagus or some shit? Or what happens when you don’t cook your biscuits all the way through? Either way a fire name, a hat I’d rock and more importantly:

That’s enough to get me to a game.

I can’t find the official fitted online but they need to get that together because that’s a definite cop from me. I just hope the stadium vendors sell various types of bacon during the game, because if I lived in Macon would be a season ticket holder. 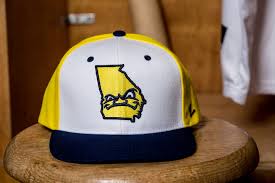 They get props off the mascot looking like he could be in an episode of The Simpsons alone. That’s a buff ass banana dog, their uniforms and hats are kinda basura though.

I’m not sure if a mascot and a city are more perfect than this one. Their mascot is even a walking, talking, bottle of mustard…that’s just elite branding right there.

I don’t want…. I NEED that black fitted so I can rock that to my favorite Mexican restaurant and let them know what it is right from the jump. If they don’t have some sort of iteration of “HOLLLDDDD MY NUTS” from the loud-speaker and across the stadium after every single home run then this is a huge fail. This mascot might be creepier then Scampi, terrifying honestly.

I don’t have any strong thoughts either way here. I feel like the mascot goes with Cedar Rapids and the mascot isn’t a fucking nightmare so nothing to really say here.

I definitely bang with these hats, especially if you rock it to a brewery. I can only imagine how drunk their crowd is by the 9th inning, holy hell.

If I was like 7 and that giant wet booger looking mascot came meandering over to me I would sprint out that stadium so damn fast.

Okay I know what you’re thinking…”Lauren wtf”…I was saying the same thing also but apparently…according to this article (which could be bullshit but it’s the first thing I saw and that’s how the internet works) “baby cakes” means Cupcakes. Here’s the headline & first paragraph: